This post is going to be an attempt to get the blog more up to date (I claim lack of good internet and exhaustion as my defence). It covers a lot of distance, so I will try to let the pictures do most of the talking!

From Bariloche I was finally into Patagonia. This vast region at the southernmost tip of South America is split between Argentina and Chile. To give an idea of the size of this area and it’s population density (or lack of):

It’s vast, challenging, mostly remote, and utterly beautiful. As a result there are sometimes long distances to cover between any kind of settlements, so you need to carry plenty of provisions, and prepare for the worst road surfaces yet encountered. But that’s offset by incredible scenery!

As the gateway to this region, Barriloche is a well-developed town, with a distinct mountain-resort feel to it. Many buildings wouldn’t have been out of place in Austria or Switzerland.

My journey from here was to take me south through more of Argentina, and later to join the famous Carretera Austral in Chile; the highlight of many cyclists’ South America tours.

The first week or so was gloriously easy cycling, with lake after lake, typically with spectacular backdrops.

I was also lucky enough to wild-camp alone by the side of one lake, allowing me my most spectacular bath ever!

One day I took a great diversion that was well off the beaten track, and was surprised to find a mosque signposted. 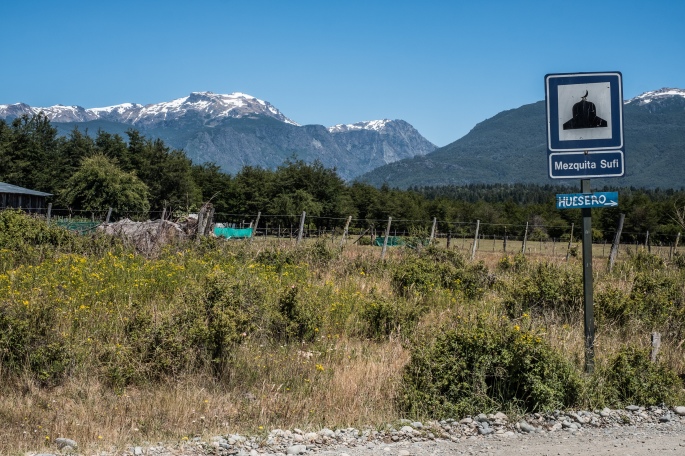 Needless to say, my curiosity got the better of me and I followed the sign, past the gate requesting Allah to bless me, and waited at the little shop. It turns out there are about 8 families living there at the moment in a commune type setting. I’m not sure who was more surprised – me to find this community in Patagonia, or the woman being asked questions by the crazy cyclist who said he used to live in Pakistan…

My route also took me through ‘Welsh Patagonia’. This area in Argentina was first home to Welsh immigrants who arrived in 1865. Whilst I didn’t hear the language being spoken (there are apparently a considerable number of inhabitants who do speak Welsh), the Welsh influence is very apparent.

From this area I crossed into Chile once more. At the border it was a relief to see good tarmac again (albeit it wasn’t to last long).

The next stop was the Carretera Austral. Built under General Pinochet during his dictatorship, its 1240 kms finally connected previously remote villages to the rest of the country. Some parts were only finished as recently as 2003.

The scenery was stunning, which made up for the sometimes shocking condition of the roads. The ‘ripio’ as it’s known, is corrugated concrete, often with big holes and rocks. Sadly many car drivers are blind to the danger to cyclists from flying stones and dust as they race past at breakneck speeds. Luckily the wilder it got, the less traffic there was. The route took in mountains, lakes, ferries and remote villages. Often, despite it being summer, you also get to experience four seasons in a day.

I was fortunate enough to meet some amazing people on the route. Wild campsites often became very social places, all of us sharing in the delight of our travels. 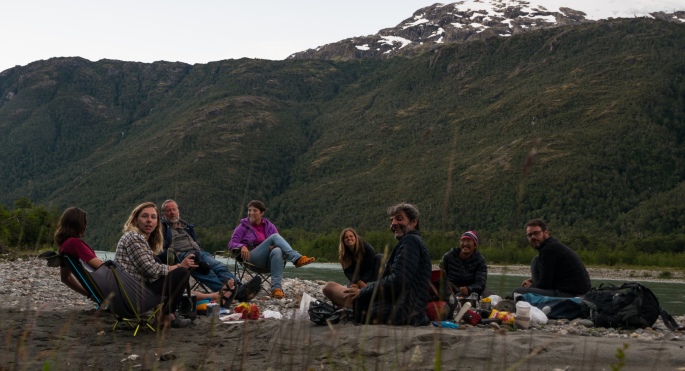 There were two meetings that particularly stood out for me: Oliver, who was walking from Ushuaia to Alaska with all his kit in a baby-stroller (he’s previously walked across the United States like this too). He covers around 40/50 kms a day – http://olithewalker.com/en/

And then there is the truly amazing French family who are travelling from Lima to Ushuaia with three children aged between 6 and 10. They were on two tandems, each steered by one of the parents, and the children alternated between the tandems and the kiddie’s bike, complete with panniers. We all had lunch together in a bus shelter on the route. They were (all five of them) truly inspiring people! https://envourchonsnosvelos.wordpress.com/

As ever, much love to all.

32 thoughts on “The Carretera Austral”