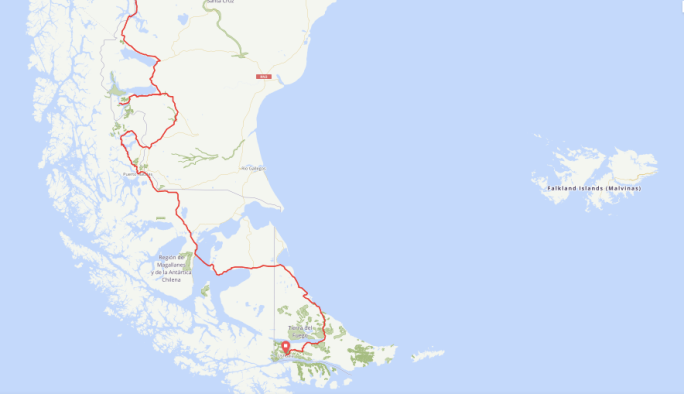 Having finished the Carretera Austral, our intrepid group of 10 cyclists had to catch a ferry to the border with Argentina. We had the choice of two ferry companies. A local had advised us to take one company over the other. Unfortunately, when we got to the port, we saw how small our boat was, compared to the other option. Yes, ours was the little grey one. We weren’t confident about getting 10 cyclists, their bikes and their bags on the boat. Somehow they managed it and we were on our way. 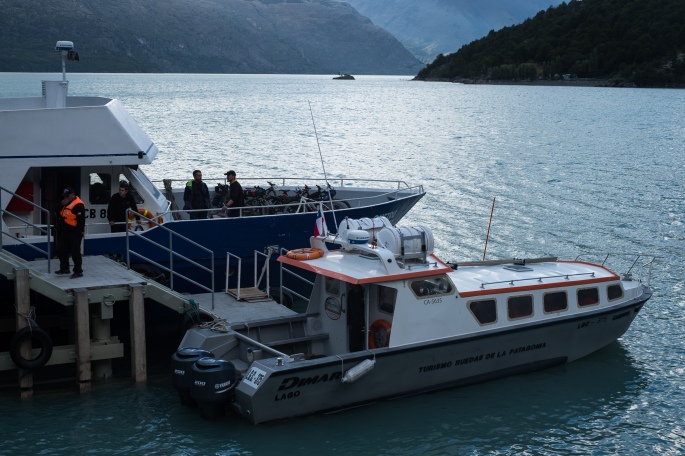 My bike had a prime position to get a thorough soaking as we sped our way across the lake. Even at this speed, the journey lasted 3 hours. 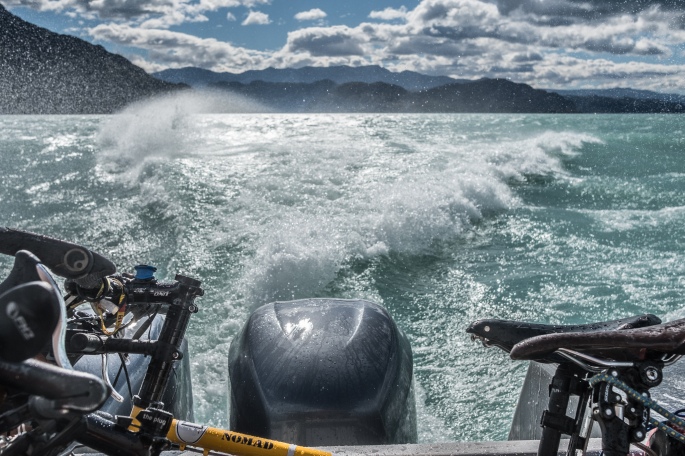 The ferries only take bicycles or foot passengers, and the border is still a difficult trek from where the ferry lands. For this reason the standard advice on blogs is to try to build a team. Our team began to show its strength as soon as we were loading and unloading, with a ‘human chain’ being far more effective than everyone trying to take their individual bits. 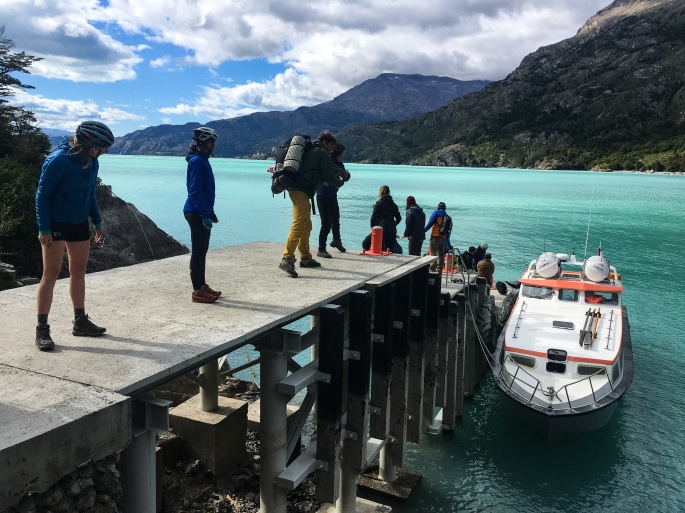 The first part to the Chilean exit post was relatively benign (not that we knew it at the time). It was a tough climb, but we arrived at the offices without too many problems.

As only hikers and cyclists use this crossing, they had built some rustic bike racks. It was good that our bikes could also enjoy the spectacular view. 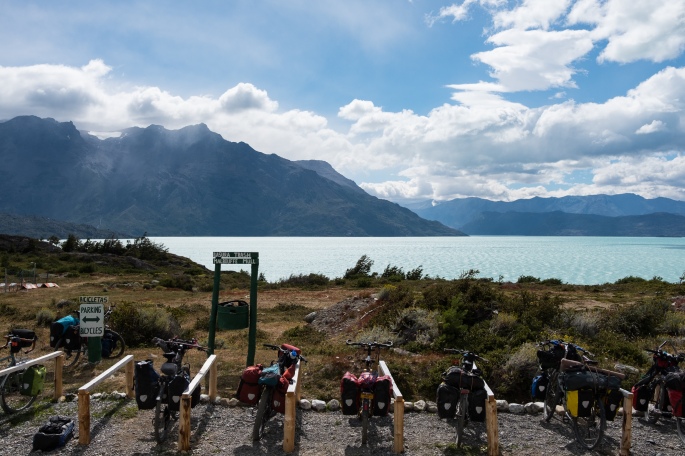 It was after this part that the fun started. The trail is not maintained well, not that it was probably ever adapted for cyclists anyhow. We were lucky that it was dry, but even then we had to work as a team to get everyone to the Argentine border, which is 5 kms after the Chilean post. For once I was at a disadvantage with my beast of a bike, because of the weight and how low the front panniers sit.

But we made it, humour intact, and in time to catch the next ferry, with the weather seemingly threatening a turn for the worse.

Arriving at the other end, it was getting late and we had about another 3 or 4 hours cycling to the next town. 4 of us decided to carry on, rather than camp on the shore and run the risk of having a very wet night (I am a total fair weather camper if I can help it!).

Finally getting to El Chalten at 10pm, we were cold, a little wet, and absolutely starving. Thankfully we were able to rectify that soon enough, as the Argentinians eat very late. Given that we had now left the terrible food in Chile and were back in Argentina, there was only one choice of restaurant – a ‘Parilla’. Argentinian steak and red wine restores the soul pretty quickly after the hardest of days. 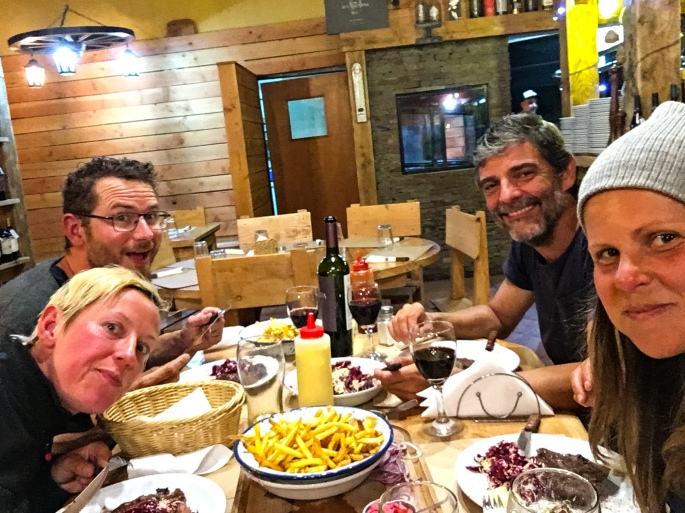 This part of Patagonia had a couple of lovely towns, and is very much a holiday destination for Argentinians and Chileans alike. It’s also the gateway to the mighty Perito Moreno glacier, which was a truly awesome sight.

Mount Fitzroy is the famous peak by El Calafate. I didn’t get to see the peak until leaving the town due to cloud cover when I was there, but it was spectacular to look back on it. 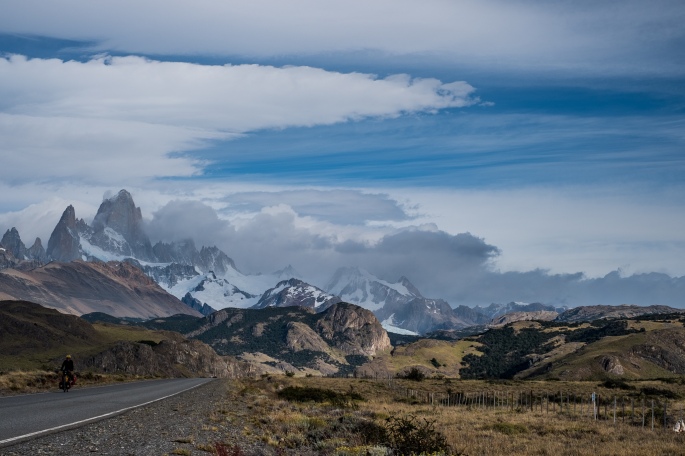 This was another stretch where the Patagonian winds impacted on riding. As I left El Calafate, I had 80 kms or so of tailwind, meaning I completed the stretch in under 3 hours (despite taking plenty of pictures). But at the end of that stretch, I had to turn into  alternating cross- and headwinds. You can see in this picture how suddenly the landscape had changed, and there was just nothing stopping the winds. 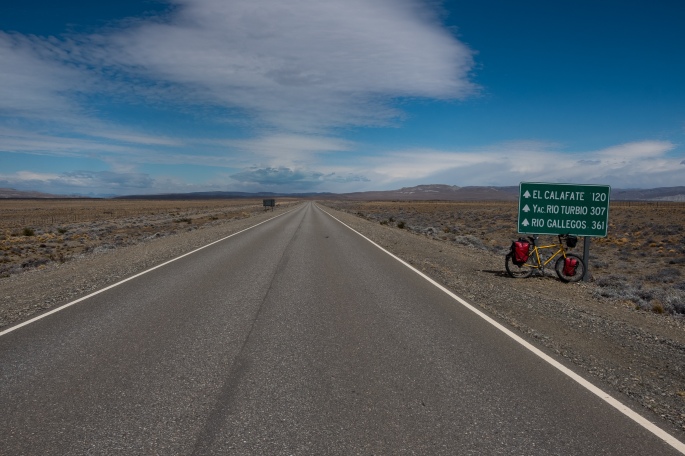 I had to battle to reach the next shelter, a restaurant on an otherwise deserted stretch. I was relieved to meet two other cyclists, Sylvia and Matt, who knew I was coming up behind them and had waited. This meant we were able to cycle together in formation, alternating the person at the front taking the headwind. Not much further and we got to a group of abandoned buildings where we planned to stay for the night. As you can see from the picture, I had now got to full ‘hobo’ mode, and was pleased as punch at how luxurious our abandoned restaurant was. Most importantly, it gave us shelter from the hammering winds. Note the cyclists’ graffiti, which covered the walls in all the buildings, detailing people’s travels.

Wind was to be the dominating challenge of Tierra del Fuego, and many days it was necessary to leave at the crack of dawn (or even before) to try to evade the gusts. Some stretches had no wind protection apart from storm drains, which made for impromptu lunch spots if you didn’t want your food blown away. Two friends from the tour, Jake and Rox, even had to sleep in one for a night because they couldn’t make their destination due to wind.

The cycling community has organised itself well, and details of abandoned buildings or other shelters that offer protection are widely shared.  A relatively new addition to the offering is an old police station that is in a perfect location for stopping overnight on one route. It came complete with tell-tale signs of its former life – boot polish, as well as an ink-pad for official stamps! 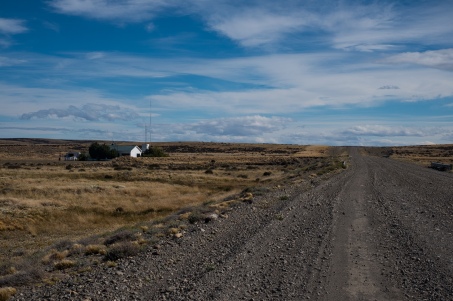 As I headed further South, there was another crossing to Chile in order to travel to the Torres del Paine national park – said by some to be the jewel in Chile’s Patagonian crown. Whilst the approach was atmospheric, the famous mountains weren’t visible due to cloud.

The bad conditions didn’t stop the buses unloading at the viewpoints though. It was funny to be there before they arrived and then watching the people pile out. Everyone takes pictures like mad for five minutes (view or no view), climbs back on board, and then peace is restored. Until the next bus….

The day that I left the park the clouds cleared, and I finally got to see what the fuss was about.

From here it got progressively less inhabited as I travelled South. The distances are big between towns, with nothing to see on the gravel roads apart from entrances to farms, the buildings often so far way that you couldn’t see them from the road.

Suddenly I found myself with just a couple of days to go until I reached my destination. But not before I’d made friends with a gorgeous street dog. Despite their fearsome reputation, I’ve been lucky not to have any major problems with dogs here. And this one decided he wanted to tag along for a while. He ran with me for over 5kms, before eventually heading back from whence he’d come.

As I got towards the end of the world, the landscape became suitably impressive again, sadly also with some equally suitable apocalyptic weather.

The last photo was in fact the final climb before I was able to drop down into Ushuaia. The hail gave way as I descended, and, all of a sudden, I found myself at the famous sign marking the end of the world.

7000 kms of pedalling since Colombia, and I was there, at the end of my road. 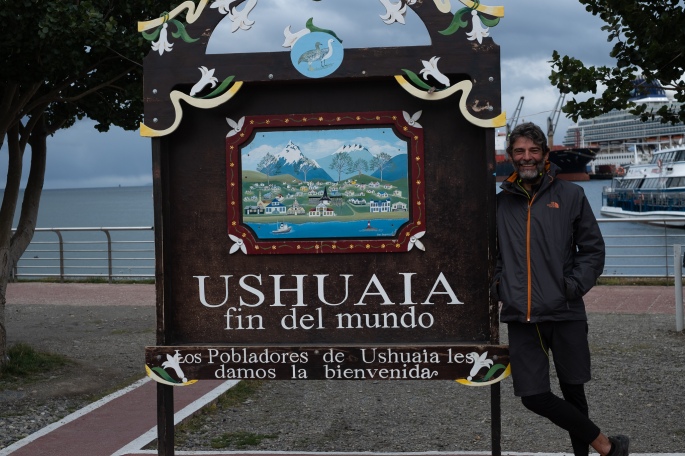 From Ushuaia I flew North to Buenos Aires, where I’m now relaxing and enjoying the city (whilst my bike remains in its box). From here I shall be flying to Madrid next month, and plan to cycle home to Berlin from there.

The cycling in South America has been everything I’d hoped for and more, whilst the kindness of the South Americans has been remarkable. It’s been a blast.

Love to all, and thanks for being with me on the ride.

53 thoughts on “Journey to the end of the world”