The first days in Ecuador made me apprehensive of what the country would hold. All the towns and villages I cycled through felt deserted; as though everyone had moved away. One constant feature however was the presence of street dogs, including this chap who was happy to guard the bike whilst I had breakfast.

I missed the vibrance of the village squares in Colombia, which were always lovely to walk around after a day in the saddle. Luckily though, the scenery remained spectacular, with a mix of jungle, rainforest and mountains to keep me amused. Along with the occasional empty roadside stall. I didn’t get many customers. 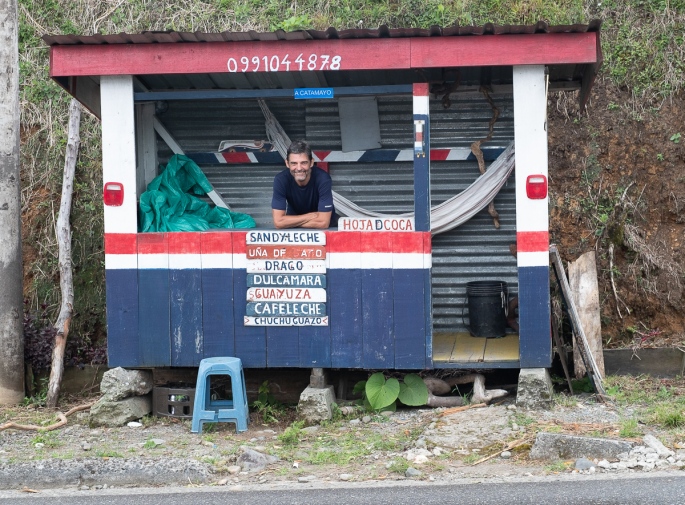 The climbs were ever-changing, going from Jungle to dense forest in the mountains, and sometimes with incredible micro-climates. You could go from a beating sun to rain to dense fog, all in one climb.

This video compilation gives an idea of some of the different kinds of roads that I have been travelling on (all taken whilst on downward slope – there’s a climbing one later!):

Deep in a jungle area, I also stayed at a Yoga retreat for the first time in my life. An added benefit of getting up at the crack of dawn for early yoga was to see the sun rising over the jungle.

The ride from the retreat proved to be one of the most enjoyable of my trip so far. I rode along gravel paths through the jungle, passing little villages and gradually watching the scenery changing to get to the more mountainous areas once more. Interestingly, despite being so much more remote here, the kids were far more friendly and inquisitive than in other places I’d experienced in the couple of weeks before.

The theme of deserted towns and villages persisted until I reached Banos, a thriving town with a good mix of local and foreign tourists, but still a proper town in its own right. I enjoyed a few days rest from the bike. I also achieved one of things I’d been looking forward to for a while – having a go on the ‘Swing at the end of the world’, high up in the mountains. Another bonus on the road to Banos was that there were small waterfalls dotted along the road – perfect for cooling off whilst on the climbs!

Suitably refreshed, I headed out once more. I was fortunate to reach the town of Guamote for the weekly market. Like Silvia in Colombia, it was an insight into a different world.

From Guamote I headed into the Sangay national park, a UNESCO heritage site of over 5000 square kilometres. It was stunning, and I also came across my first place offering roasted guinea pig (apparently there’ll be more of that in Peru)

As I went further into the park, there were very few hamlets, and almost no tourist infrastructure, so I did my first night of ‘wild’ camping. I chose a spot by one of the lakes, and set up camp. Despite having only heated up a can of sardines, I was ridiculously pleased with myself for having established camp and fed myself in such a beautiful spot. I was rewarded the next day with the view of the still snow-capped peaks behind the lakes.

Having spent the previous day climbing incessantly, after a flat section with more lakes, the reward came with a more or less constant downhill stretch of about 60 kms, dropping 2500 metres.

Sometimes it’s the little things that surprise you on the road. I’d bought myself something to eat in one little village, and sat in a convenient bus shelter to eat. Despite being a very small place, they were advertising the local beauty pageant, and I was amused that some of the contestants had put up posters to canvas support. 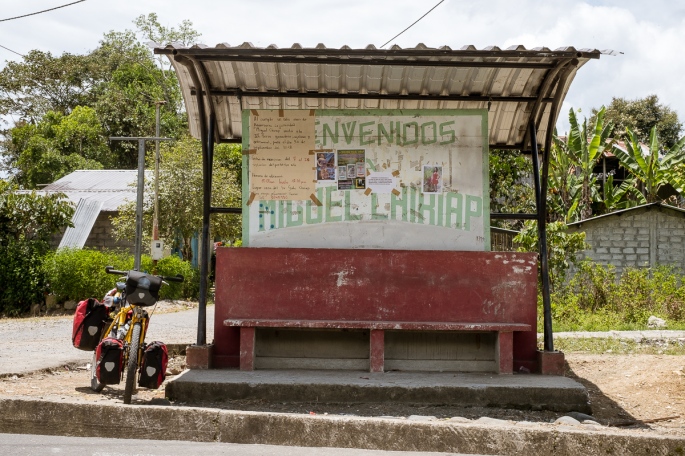 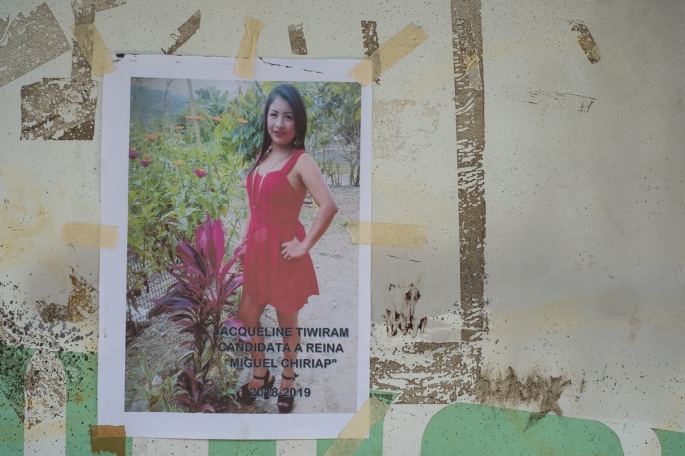 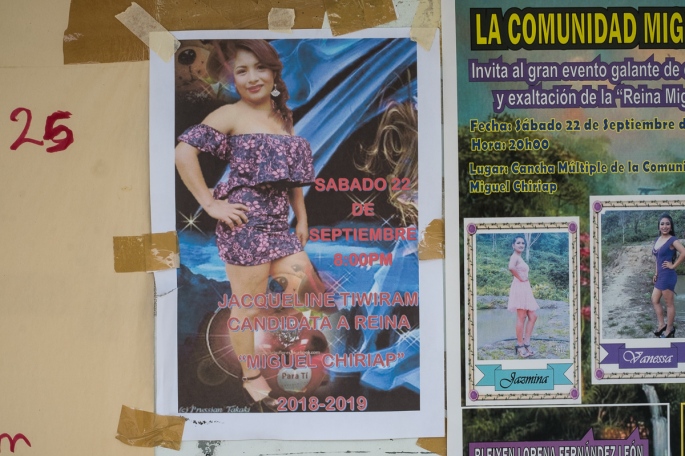 The biggest climbing challenge was yet to come. From the small town of Limon I had a near continuous climb of around 50 kms at an average gradient of over 8%, crossing the mountains in Sangay once more. I was hoping to split this into 2 days, either wild camping or finding a bed somewhere. Unfortunately none of my maps showed any accommodation whatsoever on route, and neither was I able to find any information online. Nor did I know what kind of road surface awaited me. A historic post I found warned of gravel roads and roadworks. I pressed on, banking on the probability of, if all else failed, being able to thumb a lift from a friendly Ecuadorian with a pick-up truck.

The climb was brutal – easily the most taxing so far. The gradient, my luggage, and the reducing oxygen due to altitude meant I crawled along at speeds between 4 and 6 km/h. The friendly honking and thumbs-ups from drivers increased with my altitude, along with more than a few incredulous looks.

As I climbed, I realised that opportunities for wild camping were virtually non-existent. Given the fact this road was literally cut into the mountains, I guess that was inevitable. There was simply no level ground. Luckily, 32 kms after setting out, I found a truckers’ café that had basic (and I mean very basic) accommodation. Frankly I didn’t care how basic the accommodation was, it made sense to stop early and rest and complete the climb the day after. It may have been rough accommodation, but the view from my room the next morning was nothing but spectacular!

The next day started really well. I got an early start, and was in my stride to complete the remainder of the climb. I even did a little video, trying to show how brutal it was;

Within a couple of kms, I was in a section of roadworks, riding on a single lane of new tarmac whilst the finishing touches were being put on the other lane. Behind me a car approached, giving me a gentle honk as there wasn’t room to pass. There not being any cones or other separation, I simply moved over slightly onto the very shiny surface that was being worked on, thinking I’d simply move back over once the car had passed. Unfortunately, instead of being very sticky as I thought it would be, it turned out the shiny surface was like ice. I slipped around for a bit, before I finally fell – hard – and then hopelessy slid along the ground. I covered myself, my clothes, and my panniers in tarmac in the process. I looked like one of those birds they drag out of the sea when a tanker has sunk. Luckily some of the roadworkers came to help me. They then proceeded to cover me in petrol, which acts as a solvent. We spent about half an hour trying to get me, my clothes, and my panniers clear of the sticky stuff. Never did I imagine that during this trip I would have to strip to my boxer shorts at altitude, and allow construction workers to cover me in petrol. 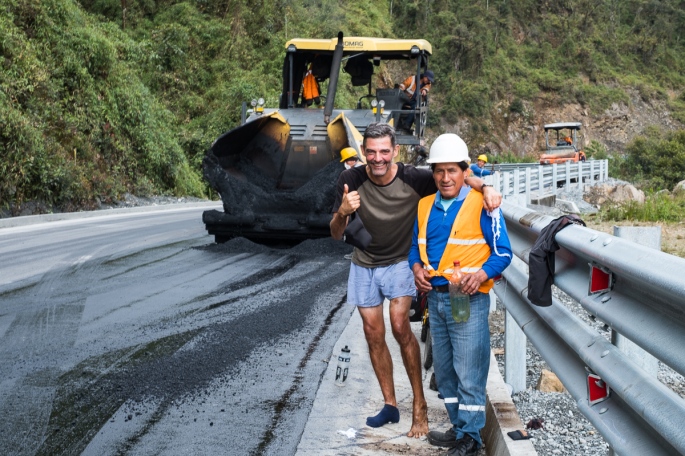 I can imagine his conversation with his family later that night “You’ll never guess what happened at work today…..”

After we’d used up all the petrol in the workers’ bottle, I headed off to a handily close waterfall to wash off the petrol. Luckily no-one near me lit a match on the rest of the ride (my jacket was still stinking of petrol), and I finally reached the summit at 3500 metres. I looked back at the road I’d climbed, then more-or-less free-wheeled for 20 kms to Gualaceo, the other side of the summit being a remarkably different landscape to the climb. I spent the rest of the evening trying to remove remaining bits of tarmac from me and my kit, using WD40 (which also turns out is a solvent for tarmac).

The next day I had a gentle ride into Cuenca, which is an absolutely charming city. It’s known as a city of culture in Ecuador, and there’s a super friendly vibe on the streets, whether or not there happens to be a band or a procession passing by.

From Cuenca I decided that I’d take the opportunity, seeing as I was in Ecuador, to visit the Galapagos islands. More about that in the next post.