Since watching the musical ‘Evita’ in London as a child, Buenos Aires had always held a fascination for me. Needing to relax for a while after the brutal ride South, I decided to fly from Ushuaia to BA and then take a number of weeks to get to know the city a little. And what a fascinating place it is; very friendly for a big city, and with a delightful charm. Eva Peron still shows herself, whether in conversation, politics, giant murals or those making a pilgrimage to her mausoleum amongst all the others in the amazing cemetery of the upmarket Recoleta district.

Dark parts of the city’s history are also subtly presented, such as these plaques commemorating some of the people that simply ‘disappeared’ under the military dictatorship.

Much of the city’s great expansion took place around 1900 to 1930, and a lot of these buildings still exist. I became strangely fascinated with the grand doorways, which are kept scrupulously clean and are often tributes to the architecture of the time.

Many of the bars and cafes (of which I sampled a fair few) also had interiors that had been lovingly preserved.

The ‘Porteños’ (as those from BA are called) have a great sense of fun. I witnessed a fair few demonstrations (apparently they’re very common) including ones with a distinct carnival atmosphere and live music, and I was welcomed to join in. The local police, however, didn’t seem to quite get into the groove.

I had decided to return to Europe by flying to Madrid and cycling back to Berlin from there. I figured that this would provide me with a gentle way of easing myself back into a very different culture again, and also allow me to visit various friends en route. Madrid was the ideal European city to visit after BA, sharing many of the same qualities – particularly the warm people, grand architecture, and a culture of food and wine!

Leaving Madrid after ten glorious days I headed north into the Basque region: to Bilbao, up the Atlantic coast to the culinary Mecca of San Sebastian, and then into France. 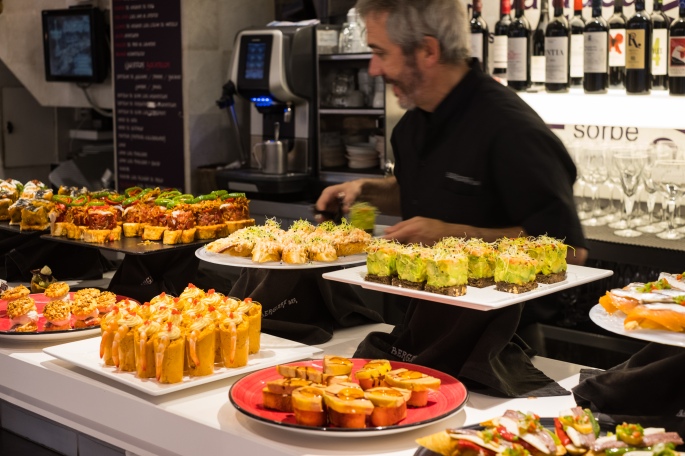 I had become quite blasé about hills, thinking that after the Andes everything else would be child’s play. Ok, it wasn’t as hard, but the ups and downs still made for tough riding at times.

As well as the beautiful countryside, the thing that for me made the Basque region a surprisingly awesome place for cycling was the courtesy shown by car drivers. Without fail, they would slow down upon approach, wait until there was no oncoming traffic, and then only overtake once they could pass on the other side of the road. It was impressive. (although I’ll confess to missing the friendly honks of South American drivers). My times on busy roads were few however, as I took smaller roads marked on the map – the ‘caminos’. It was a bit of a magical mystery tour each day, as it was impossible from the maps to tell whether it was a good road surface, a gravel track, or even just a path through grass that could be barely made out. But it was fantastic fun!

The scenery, whilst not as dramatic as South America, was still fabulous. Given that I was now riding towards summer, I was treated to poppies a plenty, as well as fields of rape and corn, and occasional vineyards among the little towns and villages peppered along the way.

Accommodation was good quality and reasonably priced, so it was only on a couple of occasions that I wild camped. One evening it was a bit windy, but I simply couldn’t be bothered to continue to the next town, so pitched the tent. I was then battered by what felt like gales all through the night. Perhaps my decision to camp on top of a hill right next to a wind farm wasn’t the best decision I’ve ever made. I learn from my mistakes though – the next camp was tucked in the woods!

Spain was a great welcome back to Europe, and the Basque region a top tip for anyone looking for good places to bike.

Needless to say, my blog is woefully behind and I’m now getting close to the end of my trip. There’ll be a couple more posts though. I’ll just have to pretend I’m still on the road for a while longer!

As ever, much love to everyone,

19 thoughts on “Buenos Aires to Madrid. And into the Basque region….”